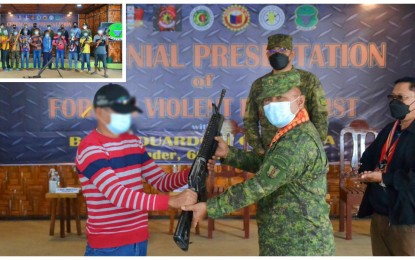 CAMP SIONGCO, Maguindanao – Displeased with their life as rebels, 14 members of the Bangsamoro Islamic Freedom Fighters (BIFF) yielded to authorities in Upi town of this province bringing with them high-powered firearms and explosives, a top military official here said Monday.

“They belonged to the BIFF-Bungos faction and they handed over 12 high-powered firearms and five explosives,” Uy, concurrent head of the JTFC, said quoting a report from the 603Rd IBde

Uy lauded the decision of the BIFF surrenderers to choose the right path to peace so they can live quietly with their families.

Since January this year, more than 300 BIFF members have surrendered to the 6ID.

The military’s surrender program is in partnership with the local government of Maguindanao that provided livelihood funds for the surrenderers to restart their lives with decent sources of income.

“Together with our partners from the local government units, religious sector, and the community, our dream of a peaceful and developed South and Central Mindanao is within reach,” Uy said.

He appealed to other BIFF members still in the field to come forward and peacefully return to the fold of the law. (PNA)