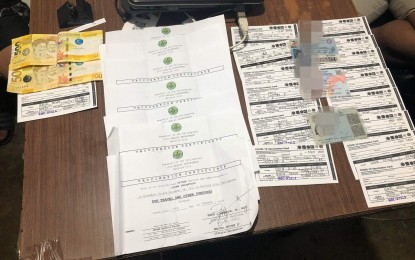 FORGED. The fake Covid-19 vaccination cards and certificates recovered by operatives of Bacolod City Police Office, Police Station 1 during an entrapment inside an establishment in the downtown area on Monday afternoon (Jan. 17, 2022). The three arrested suspects were charged with violation of Republic Act 11332 or the Mandatory Reporting of Notifiable Diseases and Health Events of Public Health Concern Act and falsification of public documents. (Photo courtesy of Bacolod City Police Office, Police Station 1)

BACOLOD CITY – Three residents here involved in the proliferation of fake coronavirus disease 2019 (Covid-19) vaccination cards were arrested during an entrapment operation inside an establishment in the downtown area on Monday afternoon.

Police identified the suspects as Loresa Funelas, 45, of Barangay Bata, as well as mother and son Maribeth Joros, 44, and Ivan, 18, both from Barangay Villamonte.

Maj. Ramel Sarona, chief of Bacolod City Police Station 1, said in a radio interview on Tuesday the suspects were set to undergo an inquest at the City Prosecutor’s Office based on two complaints.

These include violation of Republic Act 11332 or the Mandatory Reporting of Notifiable Diseases and Health Events of Public Health Concern Act and falsification of public documents.

“According to them, they operate only in the area along Locsin Street and they conduct transactions in the vicinity of the public plaza. After which, they bring their customers to the printing shop, where they (produce) the fake vaccination cards,” Sarona said.

He added that Funelas owns the printing shop while Joros and her son are the ones who transact with potential clients.

During the buy-bust around 5:20 p.m., the suspects were caught red-handed receiving PHP1,000 from the poseur-buyer.

At least 15 pieces of fake Covid-19 vaccination cards, which they sell at PHP500 each and seven forged vaccination certificates, along with a laptop computer, were recovered during the operation jointly conducted by personnel of Police Station 1 led by Sarona, City Health Office (CHO) headed by officer-in-charge Dr. Edwin Miraflor, and Regional Intelligence Unit-Western Visayas led by Lt. Col. Ceazar Pangda.

In the information filed by Police Station 1, Miraflor was named as the complainant, who submitted an affidavit, together with Dr. Chris Sorongon, medical deputy of the Emergency Operations Center Task Force, staff of the CHO, and police operatives. (PNA)