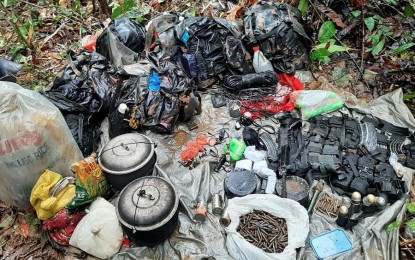 SEIZED. The anti-personnel mines, high-powered firearm and ammunition seized by the military after an armed encounter in Barangay Motorpool, Tubod, Surigao del Norte last Jan. 16, 2022. The encounter broke out after the troopers responded to a report from civilians on the presence of NPA rebels in the area. (Photo courtesy of 30IB)

In a statement Monday, the Army's 30th Infantry Battalion (30IB) said troopers carried out security operations following reports of the presence of NPA rebels extorting and harassing the residents in the area.

"A 15-minute gunfight immediately ensued after our troops were fired by the rebels upon arriving in the area," the statement read.

In the same statement, Lt. Col. Ryan Charles Callanta, the commander of 30IB, lauded the residents for tipping the government forces vital information that resulted in the success of the operation.

“We are thankful to the residents for their continued support of our fight against terrorism,” Callanta said.

He urged the residents, especially those in the remote areas of Tubod town, to continue their trust in the government and the Army.

“We will continue to perform our duties and responsibilities especially during these times of difficulties caused by the continuing pandemic and the recent typhoon,” Callanta said.

Tubod was among the areas hit by Typhoon Odette in December last year.

The Anti-Terrorism Council also formally designated the National Democratic Front as a terrorist organization on June 23, 2021, citing it as “an integral and separate part” of the CPP-NPA that was created in April 1973. (PNA)