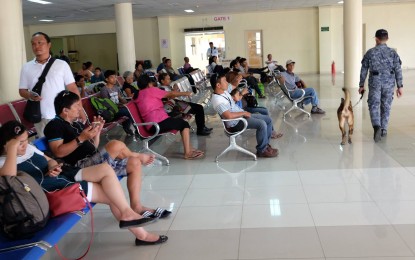 SEAFARERS. Travelers await boarding calls at the passenger terminal at the Dumaguete City port in this undated photo. The Philippine Ports Authority and the Maritime Industry Authority in the Negros Oriental capital are investigating alleged fixers selling boat tickets at a higher price following complaints that have surfaced recently. (PNA file photo by JFP)

DUMAGUETE CITY – The Philippine Ports Authority (PPA) and the Maritime Industry Authority (MARINA) here are investigating the reported presence of fixers allegedly buying tickets from shipping lines in bulk and reselling them to passengers at a higher price.

Rocky de la Peña, Administrative Officer I and who heads the local MARINA office, told the Philippine News Agency (PNA) on Thursday
the move comes after a national television journalist bound for Siquijor via Dumaguete posted on social media last May 21 about her experience of having to wait long hours before she and her crew were able to depart for the nearby island-province.

The journalist said they missed the cut-off for the 10 a.m. trip to Siquijor “dahil may nakakasingit sa pila at binebenta ang ticket ng mas mahal (some have cut the line and are selling tickets at a higher price),” as she called out the Department of Transportation and the Department of Tourism in the same post.

She did not specifically mention the word “fixer” but comments on her social media post included complaints from some people who said they also experienced the same or similar situation.

De la Peña said a meeting was held Tuesday with the PPA, MARINA, port police, the Provincial Tourism Office, and shipping lines operating the Dumaguete route, to discuss ways and means to ease the plight of travelers, especially during the peak season.

“One of the measures agreed in the meeting is for shipping lines to issue priority numbers to ticket-buyers who are waiting in line, on top of those who have booked online or have an advanced booking,” he said in mixed English and Cebuano.

The shipping lines have denied the presence of fixers and also promised to do their investigation, he added.

The MARINA officer also said that these shipping lines should also double-check when a person buys tickets in bulk for a purported group tour.

Meanwhile, De la Peña asked the shipping lines to make the public understand that tickets are only sold according to the holding capacity of a vessel and they should not issue anymore beyond the prescribed number.

He also urged the people to file a complaint with the MARINA against any shipping line if they have certain issues or concerns.

So far, his office has not received any complaints, he said. (PNA)