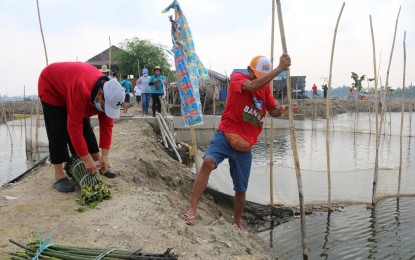 MANGROVE PLANTING. Fisherfolk plant mangrove propagules in Nagbalon village, Marilao town in Bulacan on Friday (May 27, 2022). This is part of the government's effort to help improve the quality of water in the Marilao river and the same time, prevent flooding and serve as a breeding ground for fish. (Photo courtesy of BFAR-3)

CITY OF SAN FERNANDO, Pampanga – About 8,000 mangrove shoots will be planted in Barangay Nagbalon in Marilao, Bulacan as part of long-term measures to improve the quality of water in the town's major river.

Wilfredo Cruz, director of the Bureau of Fisheries and Aquatic Resources (BFAR) 3 (Central Luzon), said Friday that 60 fisherfolk were taught how to properly plant mangroves around the Nagbalon creek, a minor water channel of the Marilao river, which in total will cover a hectare of rehabilitated mangrove area.

“Mangroves can prevent storm surge, serve as the breeding ground for fish, and at the same time, protect the dike,” Cruz said in a video interview.

“Makakatulong po ito sa tubig para maging malinis. Alam naman po natin ang kulay ng ating ilog. So, sa takdang panahon, kapag lumaki na ang bakawan, ito ay makakatulong para mag-recycle ng tubig. Makakatulong sa palaisdaan and at the same time, sa kapaligiran (It can help make the water clean. We know the color of our river. In due time, once the mangroves have grown, they can help recycle the water. They can help the fishpond and at the same time, the environment),” Morales-Mendoza said.

Marilao Mayor Ricardo Silvestre thanked the BFAR, citing the importance of mangroves in preventing soil erosion and flooding in the coastal areas.

According to BFAR-3’s Coastal Resource Management Unit, mangroves are expected to be fully grown in five to 10 years.

About one million mangrove propagules have been planted in some areas of Central Luzon in the past five years. (PNA)