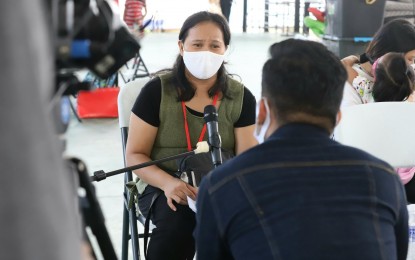 HOPE FOR AN ENTREPRENEUR. Diane Carol Elumba, 36, shares her experience on how her food shop struggled with the pandemic's impact, in an interview at the BP2 depot in Quezon City on Monday (Dec. 6, 2021). Her family is among the 13 families set to depart to their respective provinces on Dec. 7. (PNA photo by Robert Oswald P. Alfiler)

MANILA – A beneficiary of the "Balik Probinsya, Bagong Pag-asa" (BP2) program on Monday looks at pursuing an e-commerce business upon her return to La Union province.

Diane Carol Elumba, 36, was one of the thriving entrepreneurs hit hard by the shutdown of malls and major retailers across the country in response to the coronavirus disease 2019 (Covid-19) outbreak last year.

After pandemic-induced restrictions were imposed, Elumba said her family only relied on cash assistance distributed at the height of the pandemic's rage.

"Nung nagpandemic, natigil yung aming pagba-bazaar kasi wala nang nagma-mall eh, sarado yung mga malalaking stores (When the pandemic hit, we lost our shop because no one was going to the malls and all the big stores had to close doors)," said Elumba, who turned to online work during the pandemic just to put food on the table.

Elumba said her family had been eyeing to go home to La Union province, which offers more breathing space compared to the densely populated Metro Manila.

The Elumba family was among the 11 families who arrived at the BP2 depot along Agham Road in Quezon City to undergo dispatch process for their Tuesday departure.

Institutionalized under Executive Order 114, series of 2020, the BP2 program is an initiative of the national government created to address the congestion in Metro Manila's urban areas.

Government agencies guide the beneficiaries throughout this transition by providing additional support and incentives on transportation, livelihood, family needs, subsistence, education, housing, and others. (PNA)