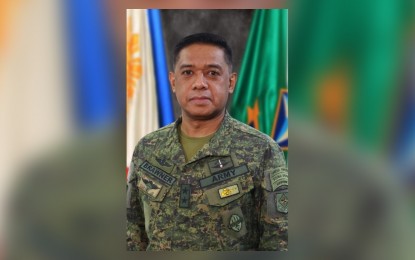 MANILA – Newly appointed Philippine Army (PA) chief, Maj. Gen. Romeo Brawner Jr., has vowed to focus on taking care of the health, welfare, and morale of the troops and their families.

He also said he would continue to focus on developing the Army's core competency, which is warfighting, by further developing the Filipino soldier and the PA as an organization.

Brawner noted that soldiers must be capacitated to finish the task given to the military by President Rodrigo R. Duterte, which is to eliminate the communist rebels by the end of his term.

Ka Oris' neutralization resulted in a series of surrenders and seizure of firearms nationwide.

The 4ID also significantly reduced the Communist Party of the Philippines - NPA presence in their areas of responsibility, in compliance with Duterte's directive.

On Wednesday, the Armed Forces of the Philippines (AFP) lauded the appointment of Brawner Jr. as Army chief.

"Maj. Gen. Brawner’s appointment is a testimony to the professionalism and dynamism of the military organization, which is important in carrying out our mission to protect the people and the state," AFP spokesperson, Col. Ramon Zagala, said in a statement.

"As a competent and dedicated commander and leader, the PA is in good hands with Maj. Gen. Brawner at the helm," he said.

Brawner is a member of the Philippine Military Academy (PMA) Class of 1989.

He previously held such positions as deputy chief of staff for financial management, J10, an office which was newly activated in December 2020; commandant of cadets of the PMA; deputy commander of the Joint Task Force Marawi, in charge of organizing social support activities and as spokesperson during the Marawi Siege; commander of the 103rd Brigade, Philippine Army; and chief of the AFP Public Affairs Office.

He is also a Special Forces and Airborne officer who was named as one of the country's Most Outstanding Filipino Soldiers in 2013. (PNA)