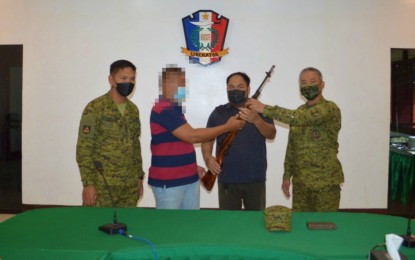 SURRENDER. A bomb-making expert of the Dawlah Islamiya terror group hands over his rifle to military and local officials during simple surrender rites held at the Army’s 602nd Infantry Brigade headquarters in Carmen, North Cotabato on Monday (Dec. 6, 2021). The surrenderer, who has not been identified for security reasons, will be given financial and livelihood packages to start his life anew as a productive citizen. (Photo courtesy of 602nd IBde)

“He was a high-value target. A bomb-making expert,” Uy said without identifying the surrenderer to protect his family from possible harassment from his former colleagues.

The DI member was formally presented to Gonzales at the 602nd brigade headquarters at Camp Lucero, Carmen in North Cotabato on Monday afternoon.

“This surrender was a joint effort of the military and police forces in coordination with the local government unit of Carmen,” Gonzales said in a statement.

Under the program, the surrenderer is eligible to receive livelihood packages and assistance from the government so he can live a sustainable and peaceful life with his family. (PNA)