Dumaguete to set up employment help desks in 30 villages 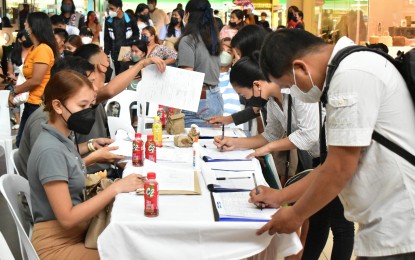 PESO JOB FAIR. Applicants fill out forms during a job fair held in Dumaguete City in April which was initiated through the Public Employment Service Office (PESO). The city government is eyeing to put up PESO employment help desks in each of the 30 barangays to speed up the collection of data as well as facilitate the needs of the unemployed. (Photo courtesy of PESO Dumaguete Facebook)

DUMAGUETE CITY – The city government here will be establishing Public Employment Services Office (PESO) help desks in the barangays to gather unemployment data and facilitate the needs of local jobseekers.

PESO-Dumaguete manager Ma. Socorro Mira on Thursday said this is to help workers displaced by the coronavirus disease 2019 (Covid-19) pandemic.

Mira said there are currently 18 employment coordinators assigned in clustered barangays but the city plans to establish a help desk in all 30 villages in the province.

“I have requested the city to put up employment help desks in the barangays to do the profiling of the unemployed, age groups, sectors, and all other data to give us a clear picture of the employment scenario here,” she said in mixed English and Cebuano.

The barangay employment coordinators will be a big help to the PESO not only for data collection but also for the facilitation of those seeking to be hired, such as during job fairs, Mira added.

The PESO office is also closely coordinating with the employers and establishments to get the total number of workers in the city.

“We can now hold a job fair or special recruitment in a barangay now that the PESO help desks are in place as they will now be our extension to facilitate the unemployed,” she said.

The PESO employment help desks will be located in the barangay halls, she added. (PNA)