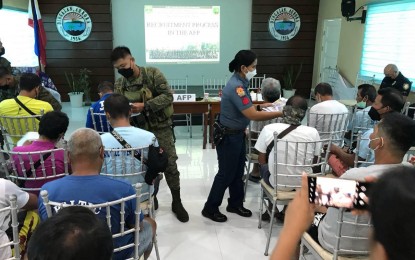 DUTERTE LEGACY CARAVAN. Leaflets on the recruitment program of the Philippine Army are distributed to residents during the conduct of the Duterte Legacy: Barangayanihan Caravan Towards National Recovery in Dingalan, Aurora on Friday. (May 13, 2022). The caravan was simultaneously conducted in the towns of San Luis, Dingalan, and Baler to distribute assistance and inform the public of the landmark programs of the Duterte administration. (Photo from the Army's 91st Infantry Battalion)

BALER, Aurora – Various government services were brought closer to residents of this province through the simultaneous conduct of the Duterte Legacy: Barangayanihan Caravan Towards National Recovery on Friday.

The Philippine Army’s 91st Infantry “Sinagtala” Battalion (91IB), Aurora Police Provincial Office, and other government agencies led the caravan by carrying out various assistance and informing the public of the landmark programs of the Duterte administration.

Lt. Col. Julito B. Recto Jr., acting commander of the 91IB, said on Saturday the caravan was simultaneously held in the municipalities of San Luis, Dingalan, and this town.

“These three rounds of government service caravan were conducted to inform the public of the government’s landmark projects and services, including the notable achievements of the Duterte administration that brought relevant changes in the lives of the Filipino people,” Recto said in an interview.

During the event, a lecture on the Enhanced Comprehensive Local Integration Program (E-CLIP) was conducted to let the residents know about the benefits being offered by the government to rebel returnees.

A lecture on the Barangay Empowerment on Child Abuse Resistance and Elimination - Flight Unwanted Lewd - Design (B.E.C.A.R.E.F.U.L.), a project of the Philippine National Police to stop sexual violence, was also given.

Other services offered were the distribution of gift packs and seedlings from the Provincial Agriculture Office, as well as free haircuts. (PNA)