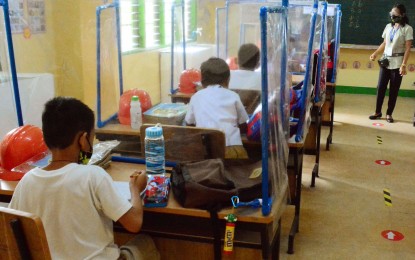 FIRST DAY HIGH. Grade 1 pupils sit on chairs with desks installed with plastic barriers while attending class at the La Huerta Elementary School in Parañaque City on Monday (Dec. 6, 2021). Some 28 public schools in Metro Manila joined the pilot run of face-to-face classes in the region. (PNA photo by Avito Dalan)

Duterte said he is particularly glad that the return of students to campuses happened “gradually.”

“I'm glad that they have thought of this just dahan-dahan lang, huwag masyadong mabilis kasi (gradually, not too fast because of) just the better part of prudence,” he said in a pre-recorded public address.

He also assured that other schools would also be allowed to reopen after the conduct of pilot in-person classes is assessed.

“Do not be dismayed kung hindi sa inyo muna (if you were not allowed to reopen yet) because these are all experimental and pilot projects. Doon muna titignan natin kasi nandoon lahat yung resources ng government and yung mga official nandoon at makita kaagad at (This is where they will assess because the resources of the government are there and officials can easily visit and check on them immediately and) they can keep posted on what is happening,” he added.

In September, Duterte approved limited F2F classes in a maximum of 120 public and private schools in areas deemed low-risk for Covid-19.

Duterte repeatedly rejected proposals of the Department of Education (DepEd) for pilot F2F classes due to concerns of more infectious variants of Covid-19.

He, however, said he would consider allowing limited in-person classes in some areas seen to have low Covid-19 transmission.

DepEd has been authorized to issue safety seals to schools that will pass the agency’s assessment on the implementation of limited face-to-face classes.

To date, only Pfizer and Moderna vaccines have been approved for pediatric inoculation. (PNA)