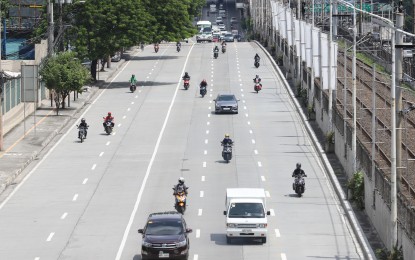 During President Rodrigo Duterte’s Talk to the People on Tuesday, Metropolitan Manila Development Authority (MMDA) Chair, Benhur Abalos Jr., said as much as 89 percent increase in average vehicle speed was recorded from the Timog Avenue to Quezon Avenue portion of Edsa from December 1 to 3.

“Travel speed has indeed improved in some identified critical areas along Edsa. For instance, from C. Jose (in Pasay) to Ortigas Avenue, from being a congested area during peak hours, it has now become a manageable traffic area. The same is also true in Katipunan (Avenue in Quezon City) to Biglang-Awa (Street in Caloocan),” Abalos said.

He said the current UVVRP, commonly called number coding, is limited during peak hours -- 7 a.m. to 9 a.m. and 5 p.m. to 8 p.m. -- as vehicular slowdown was mostly recorded at the northbound portion of Edsa while southbound averages 11 kilometers per hour.

The coding scheme was lifted during the start of the health crisis in March last year as public transportation was either suspended or limited as part of health and safety protocols.

Under the UVVRP, motor vehicles with license plates ending in 1 and 2 are barred from Metro Manila roads during peak hours on Mondays; 3 and 4 on Tuesdays; 5 and 6 on Wednesdays; 7 and 8 on Thursdays; and 9 and 0 on Fridays. (PNA)