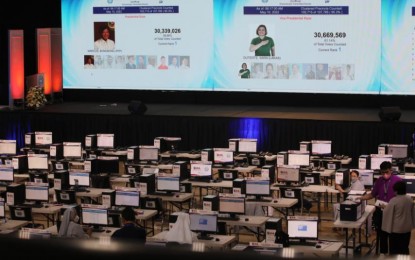 MANILA – The electronic election returns (ERs) transmitted to the transparency server match 100 percent with the “fourth copy” of the Parish Pastoral Council for Responsible Voting (PPCRV), the church-based poll watchdog said on Thursday.

This, after the PPCRV received a total of 24,640 initial physical copies of pre-transmission ERs as of 11:20 a.m. in its command center at the University of Santo Tomas in Manila. It has so far encoded 16,820 ERs.

PPCRV Lega Affairs Director and spokesperson Vann Dela Cruz said interested parties asking if there are irregularities, can coordinate with the poll watchdog and it is open to share data.

He said before the data reach the cyberspace, eight pre-transmission copies were already printed and the PPCRV is entitled to receive the "fourth copy" which is being brought by their volunteers all over the country to the PPCRV command center for validation.

Dela Cruz appealed to their critics to think about the efforts of PPCRV volunteers who literally crossed rivers and mountains to safely bring the ERs to the command center.

"There is a right venue to question those issues but let us do our work here. We still have to work. We have the mandate. ERs continue to arrive, and we continue to validate. Philippines, let's be calm," he said.