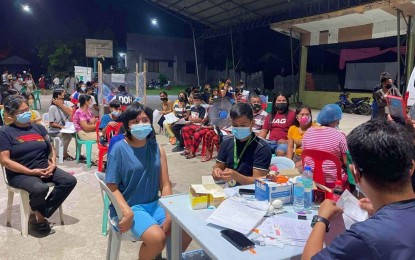 IP VAX BOOST. A team of vaccinators from the General Santos City Health Office extends work on Friday night (Jan. 14, 2022) to accommodate more than 1,000 vaccinees in the villages of Fatima and San Jose who included B’laan indigenous settlers. About 1,000 IPs have submitted themselves to vaccination since December 2021 due to fear of the Covid-19 Delta and Omicron variants. (Photo courtesy of General Santos CIO)

COTABATO CITY – Members of an indigenous peoples (IP) community in remote Barangay San Jose in General Santos City are having themselves vaccinated against the coronavirus disease 2019 (Covid-19), nixing their old belief that the vaccine is bad for their health.

Dr. Jett Gajete-Oco, city health officer and chief of the local inter-agency task force (IATF) addressing Covid-19, said it took some time for an estimated 1,000 IPs to submit themselves to vaccination but with the help of responsive barangay officials, they were able to do a “turnaround” on the IPs’ health situation.

“Our strategy is bridging leadership by engaging all barangay captains through the local IATF to have ‘ownership of the vaccination program’ and not relying solely on the rural health unit to deliver the services,” Oco said in a statement sent to the Philippine News Agency (PNA) on Saturday.

In response, she said the IP community of San Jose acted positively and joined other barangays in engaging in a massive vaccination campaign.

“This led to (the) co-creation of another body with the 609 purok (sitio) officials who were tasked to encourage their unvaccinated constituents and tap private stakeholders to support us,” Oco said.

She said with the positive support from all sectors, including the IPs in San Jose village, they have brought the “Bakuna Bus” to the area to reach the far-flung sitios for the IP communities to have access to the vaccines.

“Other than (the) Bakuna Bus, we also deployed the rural health unit on specific days in the remote areas. Such is the case of San Jose (village),” she said.

In a phone interview on Saturday, Dr. Karl Igrobay, medical officer for barangays San Jose and Fatima, said even he was surprised by the sudden increase of IPs in their vaccination activities since December 2021.

“All the IP village officials have become so responsive to our call for vaccination to the point that they are the ones calling those unvaccinated and have themselves immunized,” he said.

Igrobay said the IPs in San Jose belong to the B’laan community in the area. He noted that the barangay has about 12,000 mixed settlers of Christian, Muslim, and IP people.

He narrated that there was an instance in Sitio Biao of San Jose in October last year where many IPs got sick of Covid-19. Some of them also died.

“This served as the wake-up call for the IPs to have themselves inoculated as during that time the Delta variant was still much around (in) parts of the country, including General Santos City,” he said.

Igrobay said the Delta variant has instilled fear among the B’laan settlers.

“Their fear (of the virus) was compounded by the Omicron variant now present in some parts of the country,” he said.

He said their records indicated that more than 400 IPs have submitted themselves for vaccination during the last two weeks of December 2021 alone.

“We are happy with the overwhelming response from the two villages, including the IPs, despite we are undermanned in our team,” Igrobay said.

On Friday alone, he said, his vaccination team of four nurses and four midwives, backed by a dentist and a medical technician, managed to vaccinate 1,167 villagers in San Jose and Fatima.

“We are inspired by such response that we have extended our work up to nighttime,” he said.

So far, he said, his team has managed to vaccinate about 30,000 individuals in the two villages.

The barangays of Fatima and San Jose are situated some 25 kilometers away from the city proper. It borders the upland town of T’boli in South Cotabato. (PNA)