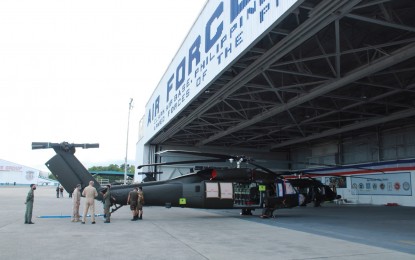 MANILA – The government has allocated a total of PHP62 billion for the acquisition 32 more Polish-made S-70i "Black Hawk" combat utility helicopters for the Air Force and six offshore patrol vessels (OPVs) for the Philippine Navy.

When asked where the country intends to acquire the additional helicopters and OPVs, Lorenzana replied: "OPV with Austal (the Australian defense manufacturer and shipbuilder) and 'Black Hawk' from PZL Mielec, Poland."

He, however, clarified that there is still no contract yet issued for these assets and “still under negotiation.”

The first batch of six "Black Hawk" helicopters was delivered in November 2020, followed by the second batch of five in June that was formally accepted, turned over, and blessed in a simple ceremony on October 13.

The last batch of five choppers was delivered on November 8 and formally accepted by the PAF on December 3.

One unit from the initial six units delivered in the country crashed last June 24 while on a night-flying exercise.

The PAF's newly-acquired S-70is were deployed to transport Covid-19 vaccines in remote areas around the country.

Earlier, Lorenzana said Austal, which has a shipyard in Balamban Cebu, remains at the forefront in the ongoing procurement for OPVs for the Navy.

"Ang nasa forefront ng (At the forefront of the) procurement is the Australian (shipbuilder) Austal which is in (Balamban), Cebu. Meron silang branch na gumagawa din ng barko so kung matuloy yun maganda rin yan sa ekonomiya dahil maraming makikinabang na mga Pilipino (They have a branch that makes ships so if it pushes through, it will be good for the economy and the Filipinos will benefit from it), it will generate employment," he said.

He also expressed hope that they can sign the contract before the end of President Rodrigo Duterte's term. The OPV project is expected to replace the World War II surface assets decommissioned by the Navy.

"I hope we can sign the contract before the end of the President's tenure. Medyo matagal yung proseso (The process is taking a bit long)," Lorenzana said.

After the OPVs, another project for the PN is the procurement for two modern corvettes, which is the smallest surface combatant capable of engaging submarines and other vessels. (PNA)