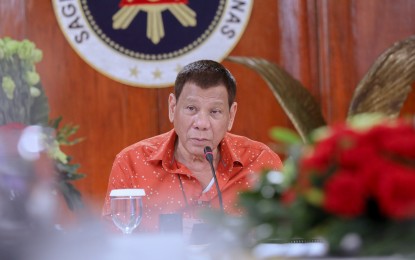 He made this call in a meeting with officials of the National Task Force-Regional Task Force to End Local Communist Armed Conflict (NTF-RTF-ELCAC) at the Garden Orchid Hotel in Zamboanga City.

“I call on the local chief executives of the Zamboanga Peninsula to harmonize your efforts in the fight against lawlessness and insurgency and to support the government’s key programs in achieving sustainable peace and progress. Gamitin mo yung power mo (Use your power) and I will back you up,” he said in his speech.

Duterte thanked members of the joint task force for their strong commitment to work for “the greater good” of Filipinos.

“I thank all of the officials and members of the Joint National Task Force and Regional Task Force to End Local Communist Armed Conflict here in Region 9 for dedicating and risking their lives to put an end to this decade-long insurgency problem that has curtailed development in the countryside,” he added.

During the meeting, several government agencies awarded different programs and projects to various beneficiaries in an effort to bring development to communities affected by the rebel insurgency.

Zamboanga Peninsula's development efforts are presently managed through the coordination of civilian agencies and security forces in the region, according National Security Adviser Hermogenes Esperon Jr., who is also NTF-ELCAC vice chair.

“The peace and order in the region is achieved through the joint efforts of the security officials and regional offices of national government agencies,” he said.

Particularly in Zamboanga Peninsula, a total of 86 projects under the BDP are being implemented for 34 barangays cleared of the influence and threat of the Communist Party of the Philippines-New people's Army-National Democratic Front (CPP­NPA-NDF) from 2016-2019.

For fiscal year 2022, a total of 39 barangays cleared of the communist threat from 2020 to 2021 shall be receiving the package of development programs under the BDP.

Executive Order No. 70, issued in December 2018, institutionalized the whole-of-nation approach in attaining inclusive and sustainable peace, thereby creating a NTF-ELCAC and directing the adoption of a National Peace Framework. (PNA)