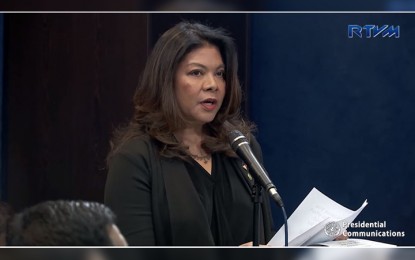 MANILA – The national government’s anti-insurgency task force is saddened over the inclusion of party-list groups Gabriela and Kabataan in the May 2022 elections.

To recall, the National Task Force to End Local Communist Armed Conflict (NTF-ELCAC) filed petitions before the Commission on Elections (Comelec) to disqualify Gabriela Women’s Party and Kabataan Party-list due to their alleged links to the Communist Party of the Philippines-New People’s Army-National Democratic Front (CPP-NPA-NDF).

“The NTF ELCAC is deeply saddened that fiercely anti-CPP-NPA-NDF party-list groups, notably Sambayanan and Epanaw were not given accreditation by the Comelec while at the same time giving accreditation to party-list groups the NTF-ELCAC has clearly identified as fronts of the terrorist group: Kabataan and Gabriela,” NTF-ELCAC spokesperson for Sectoral Concerns Lorraine Marie Badoy said in a press statement on Sunday.

Badoy, also Undersecretary of the Presidential Communications Operations Office (PCOO), said their petitions provide “incontrovertible proof” that Gabriela and Kabataan are fronts of the CPP-NPA-NDF.

“These include powerful personal testimonies of victims and their families of deceitful recruitment of Gabriela and Kabataan of our children as violent extremists of the NPA where an unbearable number of them have died at such tender ages and such violent circumstances,” she said.

She noted that their petitions also include direct testimonies of former CPP-NPA-NDF founders, cadres and operatives as well as documentary evidence seized by the Armed Forces of the Philippines and the Philippine National Police in their numerous operations for the past 52 years.

Citing calls made by various multi-sectoral groups, she expressed disappointment over the decision of the Comelec to approve the registration of the two party-list groups.

“It is unfortunate that while the vast majority of our people are already awake and know the clear truth about these groups, it seems the Keeper of the integrity and sanctity of our votes, the Comelec has remained ignorant and/or apathetic,” she added.

Meanwhile, Badoy urged Filipinos to support the NTF-ELCAC in condemning the decision of the Comelec, noting that it puts the nation and children “in serious peril.”

“We ask that they demand that the Comelec do the right thing: disqualify the CPP NPA NDF-created party list groups so that they may never again harm our people and our democratic way of life by infiltrating the very government they wish to destroy,” she added.

The CPP-NPA has been listed as a terror organization by the Philippines, the United States, the European Union, the United Kingdom, Australia, Canada, and New Zealand.

The CPP's political wing, the NDF, has been formally designated as a terrorist organization by the Anti-Terrorism Council on June 23, 2021, citing it as “an integral and separate part” of the CPP-NPA created in April 1973. (PNA)