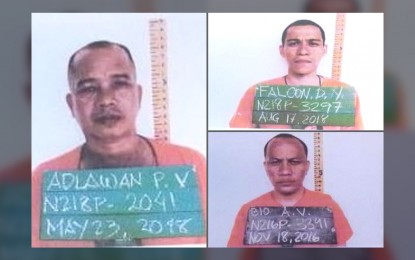 In a notice, the Bureau of Corrections (Bucor) said Arwin Villeza, 35; Drakilou Yosores, 35; and Pacifico Adlawan, 49 escaped at around 1 a.m. from the NBP Maximum Security Compound.

"The escapees are considered armed and dangerous. Coordination and recovery efforts are ongoing. The public is hereby enjoined to notify BuCor Authorities at hotline number: 0917-804-9362, 0918-600-1081, or the nearest police station near them," the BuCor said.

The details of the escapees are as follows:

Three BuCor personnel, Angelito Marquez, Mark Joseph Pesons and Jancy Dagonas and one inmate, Michael Dullavin, were rushed to the Ospital ng Muntinlupa for treatment after sustaining gunshot wounds as a result of the prison breach, initial report from the Muntinlupa police showed. (with report from Lloyd Caliwan/PNA)