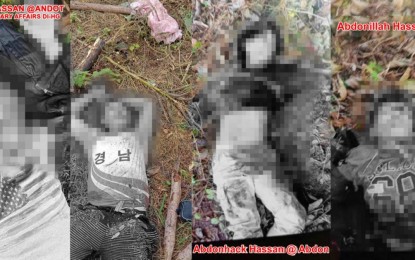 END OF THE ROAD. Four suspected Dawlah Islamiya terrorists lay dead after a clash with military troops in Carmen, North Cotabato on Friday (Jan. 15, 2022). A certain Norodin Hassan (left) alias Andot, the alleged emir for military affairs of the Dawlah Islamiya Hassan Group and mastermind of the Jan. 11 bombing in Aleosan, North Cotabato, was one of those killed during the operation. (Photo courtesy of 6ID)

CAMP SIONGCO, Maguindanao – State forces killed during a manhunt operation Friday the alleged mastermind in the bus bombing in Aleosan, North Cotabato together with three cohorts.

The suspects were killed during an Army operation in a remote village in Carmen, North Cotabato.

Recovered from them were M14 and M1 Garand rifles, ammunition and magazines for different firearms, analog cellphones, solar panels, handheld radios, and other subversive documents with high intelligence value.

“The death of alias Andot and three of his cohort only shows that justice is given to the victims of the Mindanao Star Bus bombing,” Uy, concurrent head of Joint Task Force Central, said in a statement.

On Tuesday, an improvised explosive device (IED) was set off inside a Mindanao Star Bus while plying along the national highway of Aleosan, North Cotabato, killing a five-year-old child and wounding six others.

Military and police explosive ordnance disposal teams immediately conducted a post-blast investigation to determine the identify the suspects through their IED signature style.

Intelligence reports and information from the civilian populace helped security forces to track down the perpetrators in a massive manhunt operation launched a day after the explosion.

Col. Jovencio Gonzales, Army’s 602nd Infantry Brigade commander, said troops under his unit pursued the suspects after their location was pinpointed by tipsters.

“After we identified the perpetrators who are responsible for the bombing attack, we immediately launched the manhunt operation to prevent them from doing similar atrocities in other areas thus preventing further loss of lives and damaged to properties,” he said.

Since the last quarter of last year, 6ID forces neutralized several DI leaders that included DI emir Salahuddin Hassan who was killed during a clash in Talayan, Maguindanao on Oct. 29, 2021.