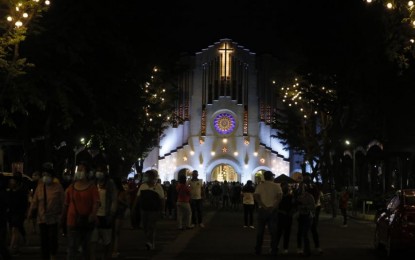 MANILA – The chief of the National Capital Region Police Office (NCRPO) on Wednesday said police officers will once again use rattan sticks (yantok) to ensure that safe physical distancing is observed in churches during the traditional "Simbang Gabi" which starts on December 16.

This, as the Catholic faithful are expected to flock to churches for the "Simbang Gabi", the pre-dawn Masses held for nine days leading to Christmas Day.

Danao said all NCRPO personnel will be allowed to report to duty in areas near their residences, as part of the "work near home" policy to give them the opportunity to spend more time with their families during the holiday season.

"They have to report still to the precincts. We have a contingency plan or security plan so there will be policemen everywhere, and not just on churches and malls, but tourist spots as well, to ensure the safety and security of our kababayans now that Simbang Gabi is set to start next week,” Danao said.

“We authorized this last year and there is a designated area based on the AOR (area of responsibility) and the approval of the LGU (local government unit),” he said.

The Philippine National Police has earlier released its operational guidelines against firecrackers to ensure a safe and peaceful celebration of the Yuletide season.

These guidelines are in compliance with Executive Order 28 issued by President Rodrigo Duterte in 2017, which provides for the regulation and control of the use of firecrackers and other pyrotechnic devices. (PNA)