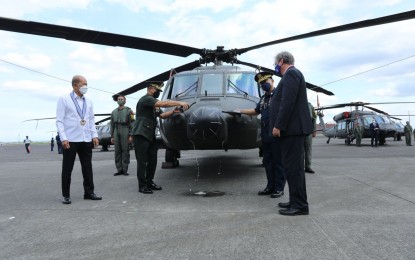 "Five brand new Sikorsky 70i BlackHawk helicopters were welcomed into our air fleet last 03 December, completing the delivery of 16 units. These five new helicopters will further improve the lift capability of the PAF to support various operations of the Armed Forces of the Philippines (AFP)," Defense Secretary Delfin Lorenzana said in a Facebook post on Sunday.

Lorenzana added that he is elated to have "personally overseen these great gains" in the government's ongoing efforts to modernize the AFP.

The five helicopters arrived at the Clark Air Base via an Antonov transport aircraft on Nov. 8.

Highlights of the event were the formal turn-over of the aircraft by the Polish Chargé d'affaires Jaroslaw Szczepankiewicz to PAF chief Lt. Gen. Allen T. Paredes followed by the blessing and ceremonial pouring of champagne to the newly-acquired air assets.

The first batch of six units was delivered in November 2020, followed by the second batch of five units of "Black Hawk" helicopters in June that was formally accepted, turned over, and blessed in a simple ceremony on Oct. 13.

The PAF has an order of 16 S-70i helicopters from Polish company PZL Mielec worth USD241 million (about PHP11.5 billion).

One unit from the initial six units delivered in the country crashed last June 24 while on a night-flying exercise.

The PAF's newly-acquired S-71s were deployed to transport Covid-19 vaccines in hard-to-reach areas around the country.

These aircraft are also currently deployed to strategic locations in support of the accomplishment of the overall AFP mission. (PNA)