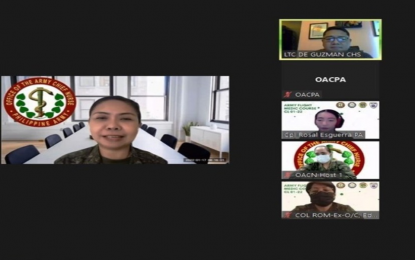 MANILA – The Philippine Army (PA) on Monday opened its first-ever aeromedical evacuation training program which is aimed at improving its life-saving capabilities as well as the survival of troops wounded in combat.

"A total of 17 students will undergo the blended training program that is divided into the Army Flight Medic Course and the Army Critical Care Flight Medic Course. The 21-week program will enhance the students’ knowledge and skills in treating and increasing the survivability of combat-wounded soldiers," PA spokesperson Col. Xerxes Trinidad said in a statement on Monday night.

The training also seeks to upgrade the Army Aviation Regiment’s aeromedical capability in anticipation of the acquisition of air assets that will be used in the transport of battle casualties, he added.

Aerial medical evacuation is the fastest way to transport a combat-wounded soldier from the point of injury to the nearest medical treatment facility.

Meanwhile, Army Aviation Regiment commander Col. Andre Santos, who graced the virtual event as guest of honor and speaker, said having this capability will greatly boost the morale of troops in the field.

“Being formerly assigned in the field myself, this training course will give our troops an added morale boost knowing that help is always nearby in case anything happens while we are accomplishing the mission," he added.