Over 500 areas under granular lockdown amid surge in infections 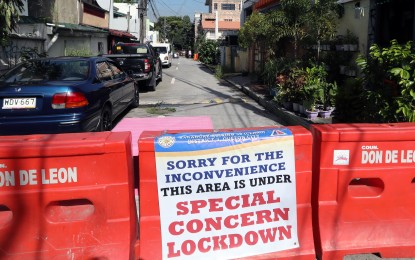 MANILA – Some 540 areas across the country have been placed under granular lockdown as the country continues to grapple with a surge in coronavirus disease 2019 (Covid-19) cases, Department of the Interior and Local Government (DILG) Secretary Eduardo Año said Monday night.

“In fact, po ay aabot sa 97 ang LGUs (local government units) na under ng Alert Level 3. Sa pagpapatupad ng ating granular lockdown nationwide, makikita po na 31 cities at municipalities ang apektado, 268 barangays po, at 540 areas naman po ang kasalukuyang under granular lockdown -- ang 60 ay nasa National Capital Region, at ang apektado ay 717 households or 1,482 individuals. (In fact, there are 97 LGUs under Alert Level 3. In the implementation of our granular lockdown nationwide, we can see that 31 cities and municipalities are affected, with 268 barangays and 540 areas currently under granular lockdown -- 60 are in the National Capital Region while a total of 717 households or 1,482 individuals are affected),” Año said in his report to President Rodrigo R. Duterte during his Talk to the People briefing.

Meanwhile, Año said the DILG has issued a memorandum circular to LGUs, police officers, and traffic bureaus to implement the Department of Transportation's (DOTr) “no vaccination, no ride policy” in compliance with the President's order to restrict the movement of the unvaccinated.

“Ang mga taong may medical condition at mga mamamayan na kinakailangang maka-access sa essential at medical services ang pupuwede lamang pong bigyan ng ating exemption. Sa ngayon po naman ay maayos ang pagpapatupad nito at masasabi po natin na sumusunod po ang ating mga kababayan (Only people with medical conditions and citizens who need access to essential and medical services can be granted an exemption. For now, it is being properly implemented and we can say that our countrymen are generally compliant),” he said, adding that the League of Provinces of the Philippines has also directed all provinces to follow the policy.

Not spared from case surge

Año, meanwhile, reported that personnel of the DILG and its attached agencies, including him, were not spared from the surge in infections.

As of Monday, Año said the Philippine National Police (PNP) has the most number of Covid-19 active infections with 4,015, followed by the Bureau of Fire Protection (BFP) with 471 and the DILG central and regional offices with 98 cases.

Meanwhile, four governors and 21 mayors have so far contracted Covid-19.

In the implementation of health protocols, Año reported that a total of 62,833 persons violated the rule on mandatory wearing of face masks.

The DILG chief also disclosed that 332 persons were caught for mass gathering infractions -- 316 of whom were warned while the rest were fined.

In the same report, Año noted that 1,842 police officers were deployed in 556 quarantine hotels housing a total of 23,970 returning overseas Filipinos (ROFs).

A total of 478 help desks were also established at quarantine hotels accredited by the Department of Health (DOH), Bureau of Quarantine (BOQ) and Department of Tourism (DOT).

He also said a total of 783 anti-illegal drug operations were conducted from January 9 to 15, which led to the arrest of 1,091 suspects.

During these operations, 17 other suspects surrendered while two were killed.

Law enforcers also seized 15 kilograms of shabu and 91.9 kilograms of marijuana with a combined value of PHP113,360,294 from these operations. (PNA)