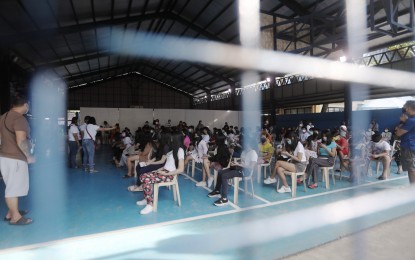 WAITING. Adults and teenagers queue up for vaccines at the multipurpose hall of Barangay Kaligayahan in Novaliches, Quezon City on Wednesday (Dec. 1, 2021). A total of 37.3 million Filipinos are already fully vaccinated as of December 2. (PNA photo by Oliver Marquez)

MANILA – The second round of the national vaccination against Covid-19 can accommodate more if walk-ins will be allowed in all local government units (LGUs).

Cabinet Secretary Karlo Nograles, acting Presidential spokesperson, said it is among the suggestions for the second “Bayanihan, Bakunahan” drive from December 15 to 17.

Citing President Rodrigo Duterte’s directive, he said LGUs are encouraged to extend their average 12-hour operating time until there are still people queueing up to for jabs.

Nograles said LGUs may also want to consider enhancing their house-to-house efforts for senior citizens and persons with comorbidities.

“Several or many of the LGUs ay gumagawa po ng mga house-to-house. Kung lahat po ng LGUs ay magkaroon ng ganiyang klaseng initiative especially para sa mga senior citizen natin at iyong mga, those with comorbidities, mas maganda po iyan (Several or many of the LGUs conduct house-to-house vaccination. If all LGUs do the same initiative especially for senior citizens and those with comorbidities, it would be even better),” he said.

Meanwhile, Nograles reminded the public to refrain from being selective over vaccine brands,

“Kailangan paulit-ulit po nating banggitin at i-remind ang lahat ‘no na wala na dapat iyong brand preference. Kung ano pong mayroon diyan, iyan pong lahat ng mga vaccines po natin ay safe and effective po para sa lahat (We need to repeatedly remind the public that there should be no brand preference. The vaccines we have are all safe and effective for everyone),” he said.

The extension for two more days in some LGUs raised the count to 9.9 million, enabling the government to exceed its target of 9 million. (PNA)