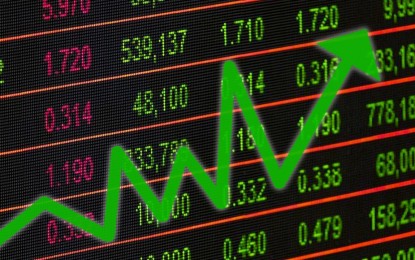 MANILA – Continued hawkish tone from the Federal Reserve resulted to another uptick in the Philippines’ main equities index on Thursday and the peso continued to remain firm against the greenback.

On the other hand, Mining and Oil fell by 1.18 percent and Property by 0.58 percent.

Volume was thin at 839.74 million shares amounting to PHP6 billion.

Advancers led decliners at 96 to 90 while 44 shares were unchanged.

Minutes of the FOMC’s meeting this month showed that US monetary authorities consider additional 50 basis points increase in the Fed’s key rates each in June and July as “likely” appropriate to address the acceleration of US’ inflation rate.

US consumer price index has risen to its four-decade high since last January to 7.5 percent and was followed by the 7.9 percent, 8.5 percent, and 8.3 percent in the succeeding three months, respectively.

Relatively, the local currency sustained its sideways close against the US dollar after it ended the day at 52.4 from 52.355 finish on Wednesday.