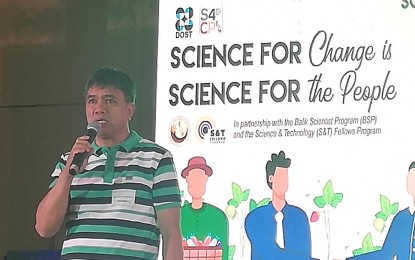 SHARING EXPERIENCE. Nelio Compello, a potato farmer from Buguias, Benguet, shares his experience during the Science for Change Project - North Luzon Summit of the Department of Science and Technology in Baguio City on Friday (May 13, 2022). He said his yield and income improved after using the planting material developed by the Benguet State University’s research and development unit. (PNA photo by Liza T. Agoot)

BAGUIO CITY – A farmer in Benguet said Friday that using the improved potato planting material produced under a research and development (R&D) project funded by the government has doubled his yield and income.

On the sidelines of the Science for Change Program (S4CP) summit for North Luzon, Nelio Compelio of the Immaculate Conception Community Cooperative in Amgaleygey, Buguias, Benguet, noted that the clean planting material came from the Benguet State University's (BSU) laboratory.

“From just three tubers produced using the old planting materials, I can harvest more than 10 tubers after I used the BSU-produced planting material,” Compelio, who is also a co-operator of the BSU potato research and development project, said in Filipino.

This innovation would cut production costs because the material could now be locally sourced, which would mean more income for farmers.

The “clean” planting material was produced by BSU using an R&D fund for the Niche Centers in the Regions (NICER) program of the Department of Science and Technology (DOST).

Compello said he used to get a rooted cutting from BSU but the limited supplies prevented more farmers from adopting the improved material.

He mentioned that their cooperative has about 300 members but only about 200 of them have so far adopted the technology because of the others’ “wait and see” mentality.

He said they have an Igorota variety that fits the requirements for potato fries and chips of various food chains, as well as the granola varieties, which are the common varieties used in homes.

Compello said he grew up helping his father, a potato farmer, tend to their farm.

The old system of producing tubers from the existing ones also created a problem with the quality of the product, which gets smaller as it is recycled, he said, adding that he sees the difference in what he is doing at present and what was passed on to him by his father.

Director Cynthia Kiswa of the BSU research laboratory described the clean material as “free from diseases, insects, pests, and bacteria, a fungus that causes potato infestation.”

She said the DOST's R&D project allowed them to address major diseases in plants and pests, such as the potato systematodes and leaf light diseases that cause a drop in production and quality, resulting in reduced selling prices.

She noted that Benguet produces 75 percent of the country’s total production of 120,000 metric tons of potatoes per year.

“Importante ang DOST kasi sila ang nagbigay ng (DOST is important because they are the source of) funds that allowed us to enhance our facilities in the potato seeds production and tissue culture laboratory and enhance the capability of our research in BSU, especially on potato research and development center,” Kiswa said. (PNA)