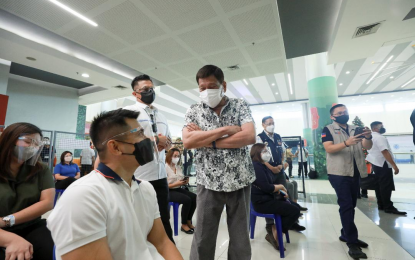 BAYANIHAN, BAKUNAHAN. President Rodrigo Roa Duterte interacts with people waiting to get vaccinated against Covid-19 while inspecting the vaccination area before proceeding to the program venue for the launching of the three-day vaccination campaign dubbed as National Vaccination Days: Bayanihan Bakunahan 2021 at SM City Masinag in Antipolo City, Rizal on Nov. 29, 2021. Duterte said he is hoping the second round of the national vaccination drive from Dec. 15 to 17 would have the same success. (Presidential photo)

MANILA – With the success of the country’s first simultaneous vaccine drive against Covid-19 from Nov. 29 to Dec. 3, President Rodrigo R. Dutertr is hoping for the same result for its second round next week.

In a pre-recorded public address aired Monday night, Duterte said the country was able to administer 10.2 million doses across the country during the first “Bayanihan, Bakunahan” national vaccination days.

He described this number as a “huge achievement” in the country’s fight against Covid-19 and thanked doctors and other volunteers involved in the five-day event.

“I'd like to thank the doctors, volunteers, and all. Of course, [Health] Secretary [Francisco] Duque and [Vaccine Czar] Secretary [Carlito] Galvez. I thank you on behalf of the Filipino people,” he said.

Duterte said he is also keen on repeating the success during the second round of ‘“Bayanihan, Bakunahan” days.

“We will have a second round of Bayanihan, Bakunahan from December 15 to 17. I hope that would have the same success,” he added.

Earlier, Malacañang said the national government is looking for ways to improve the upcoming
“Bayanihan, Bakunahan” including accommodating walk-ins.

He said LGUs are also encouraged to extend their average 12-hour operating time until there are still people lined up to get their jabs.

Nograles noted that LGUs may also want to consider enhancing their house-to-house vaccination efforts for senior citizens and persons with comorbidities.

“Several or many of the LGUs ay gumagawa po ng mga house-to-house. Kung lahat po ng LGUs ay magkaroon ng ganiyang klaseng initiative especially para sa mga senior citizens natin at iyong mga—those with comorbidities, mas maganda po iyan, mas maigi po (Several or many of the LGUs conduct house-to-house vaccination. If all LGUs had the same initiative especially for senior citizens and those with comorbidities, it would be even better),” he said.

Meanwhile, Duterte welcomed the forecast made by investment banking giant Goldman Sachs that the Philippine economy will grow the fastest in the Association of Southeast Asian Nations (Asean)-5 next year.

Although it remains uncertain, he is optimistic that the country would meet its economic targets.

“That remains to be seen. We still have to worry about the coming Omicron and how it would impact on the population of the Philippines. But the confidence at least is there and the analysts honestly believe that the gross domestic product could hit more than 7 percent. Sana, sana (I hope so, I hope so). This will be a good Christmas for everybody,” he said. (PNA)