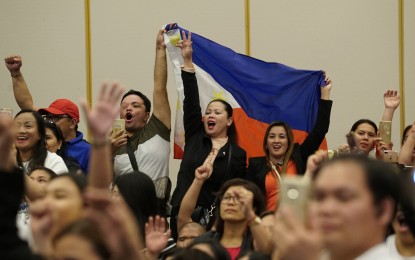 MANILA – Openly denouncing the Kafala system and pioneering the adoption of Global Compact for Migration (GCM) proved that the country has been a leader in advocating migrants' rights in the international arena.

At a pre-State of the Nation Address forum on Wednesday, Foreign Affairs Secretary Teodoro Locsin Jr. said the country was "at the forefront in the fight for migrants’ rights to decency, dignity, and protection from de facto slavery."

"Our President did the unthinkable in formal diplomacy. He denounced the customary kafala system on the way to its promised reform. He set kafala firmly on the path to extinction. The Arab states praise him," he said.

In 2018, President Rodrigo R. Duterte called for the abolition of the Kafala and has since engaged state leaders for the complete end of such labor system that he described as "unjust" and "exploitative".

Qatar was the first country in the Arab Gulf region to allow all migrant workers to change jobs before the end of their contracts without first obtaining their employer’s consent.

The Philippines was also among the countries to champion the adoption of GCM, an international document under which member-states commit to cooperate internationally to protect migrants worldwide.

"We laid down the terms of the migrant rights debate and shaped the Global Compact for Migration: not pie in the sky but the achievable because we had already negotiated those protections from Germany," Locsin said.

Overseas, Locsin said the Department of Foreign Affairs (DFA) continues to help all Filipinos, particularly those in distress and in need of repatriation.

"DFA is spread out in 94 foreign service posts around the world, across all time zones. DFA works ‘round the clock to advance Philippine moral leadership," he said.

"First, on the frontlines worldwide; most are still unvaccinated. One ambassador died; another almost; two consular officers; scores in mortal danger. You don’t hear them crying. Brave and true like Filipino nurses," he added.

Aside from promoting migrants' rights and welfare, the country also strengthened its engagement with the international community to jointly combat terrorism.

"We deepened our engagement with the Global Coalition to Defeat ISIS. And we went to Rome, not as victims but proudly as victors; having vanquished ISIS in Mindanao by retaking Marawi with the bracing battle ratio of over 1,000 local and foreign jihadi dead, to 165 AFP soldiers — to our grief. And the republic’s glory," Locsin said.

"The program is rooted in Duterte’s directive for constructive and open engagement with the UN in a non-politicized manner. The joint Philippines-Iceland resolution is a major victory for our independent foreign policy. Nobody dictates to us how to protect our own people. But where we need it, we welcome help," Locsin said.

"We are making real progress in human rights; while protecting our society from the worst of scourges: drug trafficking that takes over states as in Central America; and drug addiction that destroys its willing victims," he added.

On the West Philippine Sea, Locsin said the country was also able to achieve "international consensus that the right is with us and might cannot ever take it away".

"We stopped the whining and the crying over milk spilled by the previous regime. We have not surrendered a single inch of territory. Not by word or deed have we weakened our right to everything in the West Philippine Sea," he said.

"Without inviting pity by asking, we achieved an international consensus that the right is with us and might cannot ever take it away. DFA is proud to say: just because we have differences does not mean we have to fight over everything. But fight we will when we must," he added. (PNA)