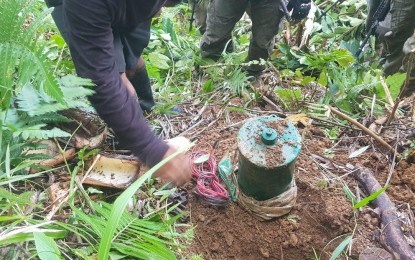 WAR MATERIEL. Soldiers retrieve an anti-tank mine and a detonating cord in the hinterlands of Barangay Matawe, Dingalan, Aurora on Friday (May 27, 2022). They also recovered a .38-caliber revolver. (Photo courtesy of the Army's 91IB)

Lt. Col. Julito B. Recto, acting commander of the Army’s 91st Infantry (Sinagtala) Battalion (91IB), said the soldiers found the rebels' supplies cache after receiving a tip from a civilian.

Recto said the troops recovered one anti-tank mine, one detonating cord, and one .38-caliber revolver.

“So far, our troops are scouring the area for further development against the enemy,” he said in an interview.

Recto commended the government troops for their immediate action and urged them to intensify their campaign against terrorism.

Meanwhile, he called on the remaining members of the NPA to lay down their arms and lead a peaceful life with their loved ones.

“I call for them (NPA) to surrender. This is now the time to embrace peace and the government’s offer of a comfortable life through the Enhanced Comprehensive Local Integration Program (E-CLIP). Our government is here ready to welcome those who wanted to embrace a new life with peace and will ensure that they will get all the assistance they need through E-CLIP,” Recto said.

The National Democratic Front (NDF) has been formally designated as a terrorist organization by the Anti-Terrorism Council on June 23, 2021, citing it as “an integral and inseparable part” of the CPP-NPA created in April 1973. (PNA)