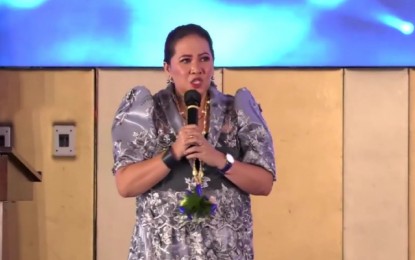 GOING GLOBAL. Technology Application and Promotion Institute (TAPI) Director Marion Decena talks about the institute's plans, during the launch of the TAPI roadmap and stakeholders' recognition in Quezon City on Friday (May 13, 2022). She said among her plans is to internationalize intellectual property applications; and assist the spin-offs and start-ups to be globally competitive and enter the international market. (Screenshot from Technology Application and Promotion Institute's Facebook page)

MANILA – The Technology Application and Promotion Institute (TAPI) will be supporting spin-offs and start-ups to reach the international market, its director, Marion Decena, said on Friday.

"In 2023, TAPI aims to internationalize intellectual property (IP) applications; fund spin-offs and startups to keep them abreast of the competitive local market, and subsequently help them enter the international market," Decena said during the launch of the TAPI roadmap and stakeholders' recognition in Quezon City.

TAPI, she said, plans to support its in-house IP portfolio management system with real-time updates. Further, TAPI aims to build-up its in-house experts including innovators from the regional offices, and facilitate technology deals.

"This will be backed up by a virtual exhibit to initially showcase the DOST-supported projects," Decena added.

The official said TAPI will provide funding in the pre-commercialization stage to help the spin-offs reach foreign markets or economies.

As TAPI also plans to make its presence felt on the international stage, Decena said the institute will conduct foreign market research; produce market intelligence reports and possibly IP analysis, and come up with the right business model canvas.

"In the next 10 years, the DOST (Department of Science and Technology) - TAPI aims to be a self-sustained institution that provides niche services to support local research and development; enter emerging ventures; foster local and international opportunities and generate revenue," Decena said.

Establishing regional and foreign hubs is also part of TAPI's plans for the next 10 years.

"DOST-TAPI indeed stepped up when it comes to programs which provide unique services, such as concept prototyping, protection of intellectual properties, technology development, promotion, and commercialization," he said.

"The achievements sought by simply fulfilling the mandates (and) commitment to always deliver among the stakeholders is critical in our national advocacies to become globally competitive and innovative," he said.