Ukraine will reclaim all territory from Russia: Zelenskyy 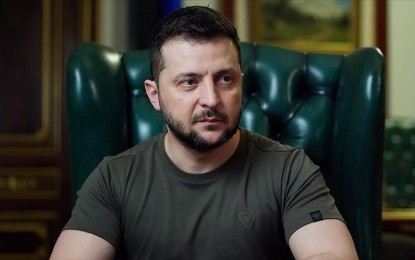 PARIS – Ukrainian President Volodymyr Zelenskyy on Wednesday assured Kyiv will keep on fighting against the Russian-imposed war until it restores total territorial unity.

“This war will end for Ukraine when we restore our unity, our territory,” Zelenskyy said in an address from Kyiv via videoconference to university students in France from Sciences Po, the National Institute of Public Service, the Ecole Polytechnique, Inalco, and Pantheon-Sorbonne University.

The initiative “60 minutes with Zelenskyy” was organized by the Ukrainian Embassy in France.

Responding to a question from a student on how the war might end, he said, we will “reclaim what is ours, our territory." "We want to bring peace and freedom back to our country."

The Donetsk and Luhansk territories of the Donbas region in Ukraine broke away in 2014 and have been recognized by Moscow as independent states.

Zelenskyy’s statement incurs that Kyiv will not give up fighting Russian forces until the breakaway regions are integrated.

He also assured Europeans that the mass-scale displacement of Ukrainians is temporary and that they should not fear a big wave of immigration. He is confident of their return once the war ends.

Nearly six million people from Ukraine have fled to other countries since the war began in February.

Zelenskyy said Ukraine’s exclusion from the military alliance of NATO allowed Russia to launch the war.

“I am convinced that if Ukraine had been admitted to NATO, there would have been no war,” he said.

He demanded of the EU to completely integrate Kyiv into the regional bloc and free the eastern European country from the fate of living under “constant uncertainty.”

Shortly after the war, Ukraine applied for EU membership, but despite assurances to fast-track the application, its formal integration could take years due to the regional body’s stringent admission process for new countries.

Zelenskyy said his country cannot be left away from membership, “it's as if someone is invited and you don't put a chair for them."

He spoke in detail about Russia's alleged war crimes in Ukraine, and promised to take all measures “to bring all criminals to justice.” (Anadolu)