Vax rate rises after May 9 polls 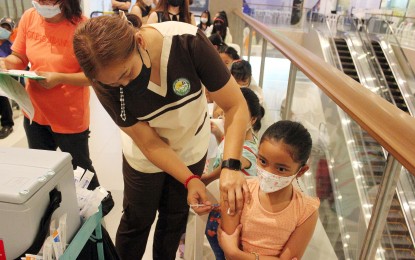 READY FOR F2F. Gavriella Samantha Ilagan, 9, receives her first dose of the Pfizer Covid-19 vaccine inside a mall in Dasmariñas City, Cavite on Wednesday (May 25, 2022). The mother said her child needs to be vaccinated before the possible opening of face-to-face classes in August. (PNA photo by Gil Calinga)

The government has fully vaccinated 70,754,670 Filipinos, representing 76.87 percent of the country’s total population, with 4,110,597 million vaccinees still waiting to complete their full doses and 14,027,031 with first booster shots.

“Medyo tumaas na ng konti (It has slightly increased). We are now having 200,000 jabs a day compared to about less than 100,000 during and before the elections,” Cabotaje said during a televised public briefing.

The government also conducted on May 11 to 20 a special vaccination program in the Bangsamoro Autonomous Region in Muslim Mindanao (BARMM), which has the lowest inoculation rate.

Cabotaje noted that the NVOC is likewise monitoring Quezon province.

“We are now conducting micro-planning sessions. They are currently doing sessions with Region 12 (Soccsksargen). We finished Palawan and Masbate. And then, we are doing Quezon and Negros next week,” she added. “With great effort, we hope we can achieve the 77 million.”

Cabotaje said the government is similarly committed to ramping up the vaccination of the pediatric population aged 5 to 11.

“We were encouraged sa (in) BARMM because of their coordination with the Department of Education and with the local government units. Tumataas iyong bakunahan (The vaccination has increased),” she added. (PNA)