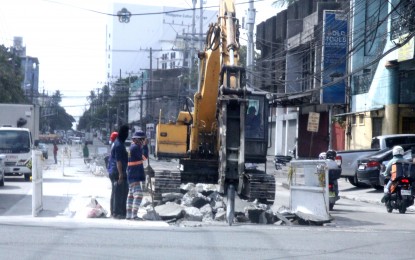 REPAIRS. The Department of Public Works and Highways uses a hydraulic excavator to dig up a road in Quezon City on Friday (May 13, 2022). The agency said road works are scheduled in the cities of Mandaluyong, Quezon, Caloocan and, Pasig from Friday 11 p.m. until Monday (May 16) at 5 a.m. (PNA photo by Rico H. Borja)

MANILA – The Department of Public Works and Highways (DPWH) will conduct road works along major thoroughfares in the cities of Mandaluyong, Quezon, Caloocan, and Pasig over the weekend.

In a traffic advisory on Friday, the Metropolitan Manila Development Authority (MMDA) said works will begin on Friday at 11 p.m. and advised motorists to take alternate routes.

“The affected roads will be fully passable by 5 a.m. on Monday, May 16,” the MMDA said.