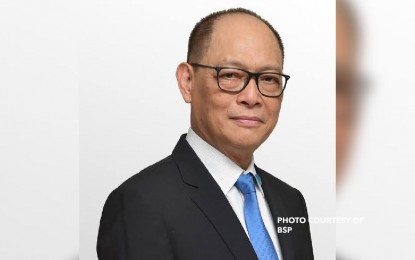 CONTINUED RECOVERY. Bangko Sentral ng Pilipinas (BSP) Governor Benjamin Diokno points to "bold and decisive fiscal and monetary actions" the continued recovery of the domestic economy. Gross domestic product (GDP) growth in the first quarter of 2022 further rose to 8.3 percent from the previous quarter's 7.8 percent largely due to the continued reopening of the economy that benefited the manufacturing and wholesale and retail trade sectors, among others. (Photo from BSP)

“The 8.3-percent GDP (gross domestic product) growth in the first quarter of 2022 is further confirmation of the Philippine economy’s resilience. This was achieved by a whole-of-government approach, which required bold and decisive fiscal and monetary actions to remain in sync,” Diokno said in a Viber message to journalists.

He said other contributors to the domestic economy’s growth include the central bank’s record-low key rates, which were slashed off a total of 200 basis points in 2020, and the time-bound regulatory and operational relief measures that “allowed banks to continue performing the important role of financial intermediation throughout the pandemic”.

The domestic economy’s performance from January to March this year, which

Diokno said the domestic economy’s performance in the first quarter surpassed markets’ projections, along with “other favorable macroeconomic indicators, helps fulfill the BSP’s vision of a post-Covid Philippine economy that is stronger, more technologically advanced, more inclusive, and more sustainable.”

“Moving forward, the BSP will continue to work with the national government to keep the economy on a robust growth trajectory and to address headwinds such as price pressures,” he added.

Diokno said the central bank “supports the implementation of non-monetary measures by the government to address supply-side pressures, such as boosting importation of specific food items experiencing price spikes and direct subsidies to vulnerable sectors.”

“For our part, the BSP stands ready to adjust our monetary policy settings, should we see material risk of these supply-side pressures spilling over to the demand side,” he added. (PNA)